Today is going to be a long 'ole day. Firstly there's the 8 hour Golden Circle tour, taking in the Pingvellir National Park, Geysir hot springs, the Gullfoss waterfall and Skaholt Church, then our re-booked Northern Lights night bus tour...fingers crossed it's not cancelled and the lights come out to play.

First stop on the Golden Circle tour is Pingvellir National Park. The part was the original site of the original Alpingi, the national parliament of the settlers, and is also the setting for many of the most important events in the history of Iceland. The views of this park is just stunning, this is a pano shot from a viewing platform not far from the coach park. 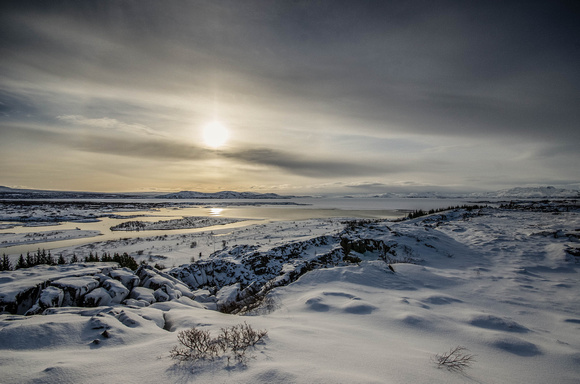 This stop is used on the tour as a quick leg rest and loo break, but gives you enough time to take in the breathtaking scenes. It's amazing how when you stand and admire these views, you suddenly don't feel the cold.

Time for quick touristy photo no.1...

Hop back on the bus, and off again 10 minutes later for another quick stop....either the driver is wanting to pan out the trip or has a weak bladder. Time though to see more of this national park, and a rather precarious walk down a pathway...honestly don't know how the pair of us didn't end up on our arses!!!! 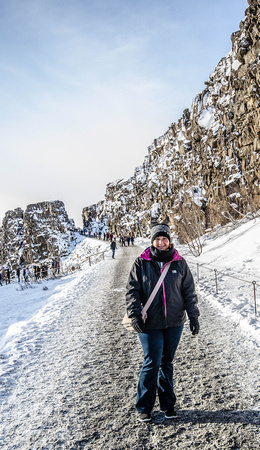 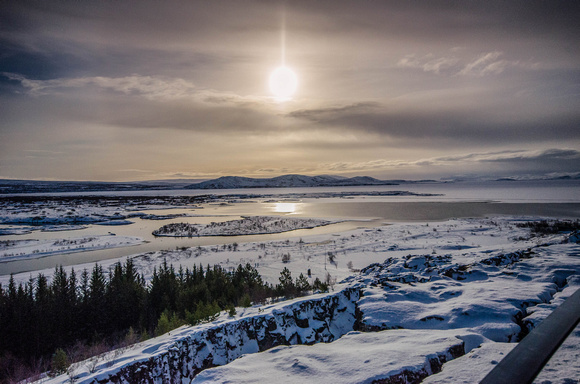 After a half hour stop here, it's onto Gullfoss and to view the Golden Waterfall. The waterfall is located in the Hvita river, and cascade 32m down in 2 stages. 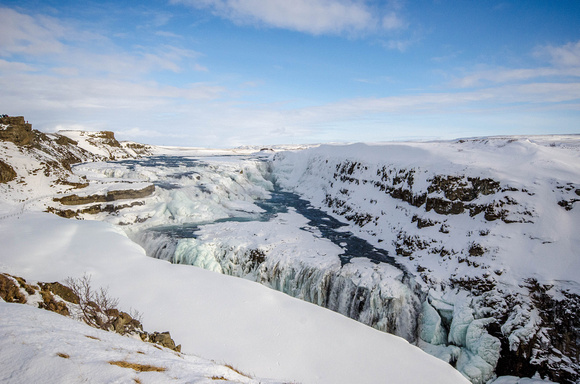 On the way to this waterfall, our tour guide (who was really good I might add!!!), was going on about the restaurant nearby which sold traditional Icelandic meat soup, which isn't really a soup but more a broth/stew. We can both categorically justify that it's neither a broth or a stew, more like 3 litres of hot water with one chicken stock cube, a load of boiled veg and over boiled lamb....all for about £10!!!! I think the term we used was #stewmyarse.

Still this did warm us up, and felt sorry for Chloe whilst stood near the waterfall as I went into full photographer mode, trying to use filters whilst my fingers were dropping off.

Back onto the coach and heading off to Geysir, and the geothermal field in Haukadalur. This field is a natural wonder of hot springs and boiling mud pools.

This is a pano shot of the field of hot springs....

Also a little further up is the Strokkur, which sends up a column of water, up to 30 metres high in the air, about every 10 minutes. Was quite amusing to watch all the tourists gather round as this shoots high into the air and let out a...whoooooo!!!!....bit like watching kids watching bonfires. 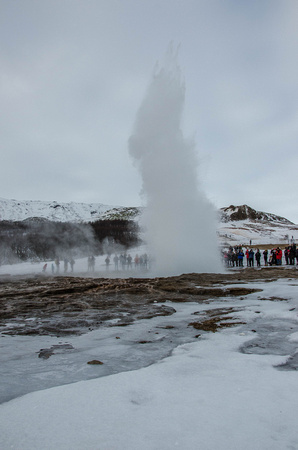 Next stop on the trip was Skalholt church, a stunning small church with an amazing view right next to it. This is the view with your back to the church. 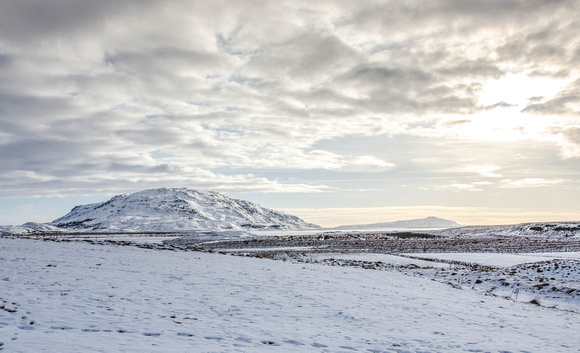 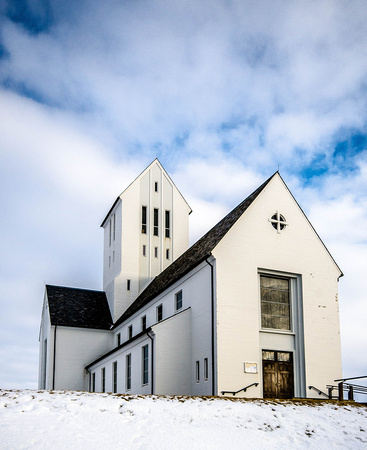 Inside the church is a list of all the ministers who have served at this church, and over 90% of them have surnames that end in SSON. I firmly believe that those in Iceland who own a business that manufactures S's for signs in the country must be billionaires!!!

Whilst inside this church, which has some amazing stained glass windows too, there was a really moving moment where Chloe lit a candle for her nan. 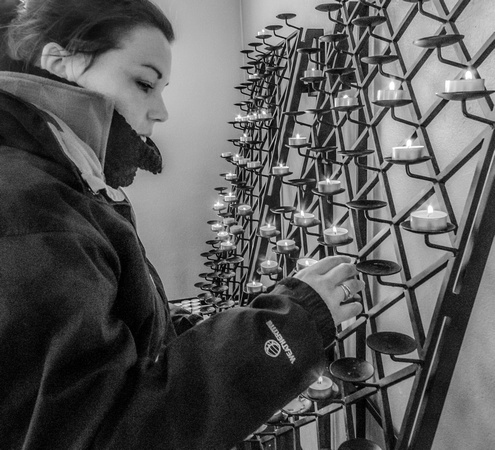 The final stop on this tour is to Fakasel and the Icelandic Horse Park, and as neither of us had any interest in horses, we decided to make use of the bar there instead hehehe.

Overall we were very impressed with the Golden Circle Tour. The tour guide was excellent, the views were absolutely stunning and it's a great way to see Iceland. Also have to say the wi-fi on the coaches on the tour is amazing too, even in remote areas it was in full working order.

Finally back to the hotel, quick freshen up, bite to eat in the hotel bar (yep back in time for happy hour hehehe), couple of drinks, and then back out for our re-booked Northern Lights bus tour.

The difference between this tour guide and the guy on the Golden Circle was unbelievable. Having set off and finally away from the lights of Reykjavik, we pulled over in what I think was a lay-by whilst travelling up into the Iceland mountains. I can only think that the driver and the tour guide thought they may have spotted the Northen Lights, but it was plain to see that all you could see was light pollution from Reykjavik in the distance. This stop also created an impromptu photography lesson from me to a small group of Japanese tourists.....bill is in the post lol. Thankfully this didn't continue at the main stop, especially as Chloe would've had to resort to desperate measures to get rid of them lol.

Back on the coach, and off to a motorway services for a 45 minute stop off, this followed by a quick tour of the car park from the driver...god knows what he was doing, and then off to our final destination.

There we were, in the middle of nowhere, the tour guide assuring us that he's put in a call to someone above (WTF!!!!), and approximately 12 coaches descended on someone's house, with us all piling out all over their fields trying to catch a glimpse of the Northern Lights. Sadly to no avail and there was only so long you could stand in a few feet of snow without loosing the feeling in your feet, and trying to take long exposure shots whilst others are flashing torches all around you. This was the nearest we got to a shot of the Northern Lights....a brief moment when the clouds parted... 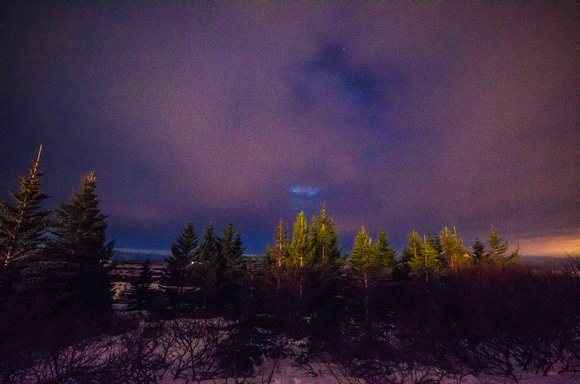 Very tired and cold, we finally got back to the hotel just gone 2am, knowing that another early start was waiting the next morning to the Blue Lagoon, but it will be a morning of relaxation and chill in the outdoor spa, followed by the Northern Lights night cruise....our final chance to see the elusive lights.