Yes, its that time of the year where star gazers and those interested in astrophotography, spend long hours with neck ache, gazing up in the sky to watch the annual Perseids Meteor Shower.

Having tried and failed in the past, and this year's supposed to be the most amazing for some years, last night I decided to get out, set the camera up and see what I could catch.

So home from the day job, around 1:30am this morning, out into the back garden with the camera sat on a tripod and on interval timer (settings details to come shortly), and facing north east, and just stand and watch.

Right the settings......my D7000 with a sigma 10-20 mm f/4.0-5.6 lens, the aperture as wide open as possible (f/4.0) and a 15sec exposure. Reading other sources they suggest 20-25sec exposures, but after a couple of test shots I found 15secs to be adequate. Had the lens as far back as it would go (10mm), manual focus and set on infinity. ISO set to 800 and the WB set to cloudy, this enabled me to shoot in an area with quite a bit of light pollution, but not let the orange street lights affect the shot. The camera mounted on my manfrotto tripod and set on interval timer so fire off a shot every 15secs, as I'm shooting a 15sec exposure then this is the least amount of time needed between each shot, others would say I needed to give it about 17-18secs on the interval timer but found what I set was good enough.

Shooting the perseids can be bit hit and miss, and normally it's sods law that the brightest meteors tend to fall when your camera is in-between processing exposures, as was the case in the early hours of this morning. Luckily though, it wasn't long before I captured one, and was also the brightest of the ones that I witnessed.

The early hours of 12th-13th August is supposed to be the peak of the shows this year, but they can still be seen days after that, so will be out tonight to try and capture some more, and as I'll be finishing the day job earlier this evening, should be out from around midnight. 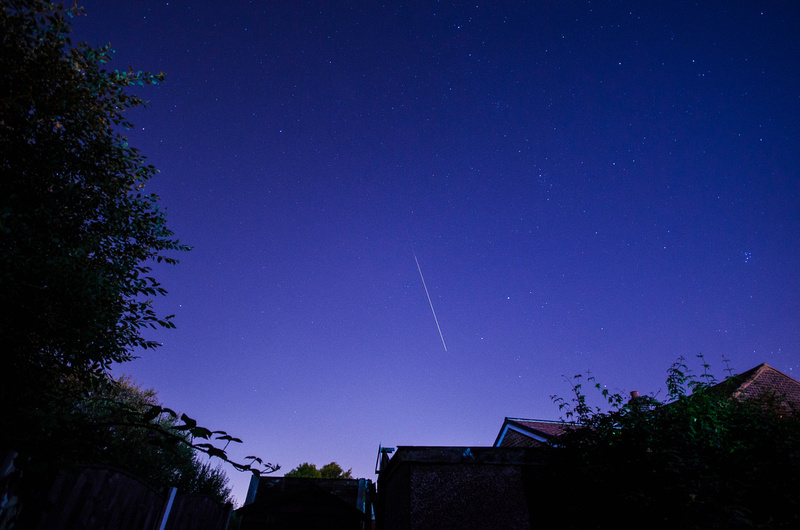