Have I caught the Northern Lights at last???

Mothers Day, and a week after returning from my trip to Iceland, and the Northern Lights decided to make an appearance in the UK night sky.

Having just spent a few days in Iceland trying to see them, with no success, I get back home after spending the evening with family in Oldham and look on Facebook in disbelief.....the Northern Lights have been captured above the hills of Oldham!!!!!

My first reaction is "WTF!!!!" and convinced these lights are taking the piss out of me. So it's time to grab the kit and tripod, thick coat, hat and gloves and set off to see if they will appear for me.

My first port of call was Hartshead Pike, it's about 10 mins away from me in the car, and overlooks Tameside and Oldham and normally a great spot. Sadly not, and once again the cloud is proving to be my nemesis, so it's off out further into the hills.

Heading out towards Saddleworth, I decided to go through Greenfield and past Dovestones Reservoir. If you take the main road past Dovestones, it takes you, eventually, over the tops into Kirklees and Huddersfield. This was the road I used to take my shot of Dovestones that made the Manchester Evening News 2016 calendar...

....hehehe yep, any chance to get this shot in and a mention again!!!

This time I carried on up, determined that I wasn't let the northern lights beat me. I had just passed the Kirklees border sign and came across a maybe on the left hand side and decided this would be the place. I positioned the car so that I could place the camera on a tripod, facing North, just outside the drivers door, and with the remote cable in hand, and sat fairly warm inside the car, started clicking away.

It was so calm and peaceful up there, especially as it was gone midnight, and the peace was only broken by the odd car going past.

While sitting there, staring into the night sky, and wishing the clouds would drift over quickly, you're eyes start to play mind games with you, and you start to convince yourself that you've seen the northern lights. 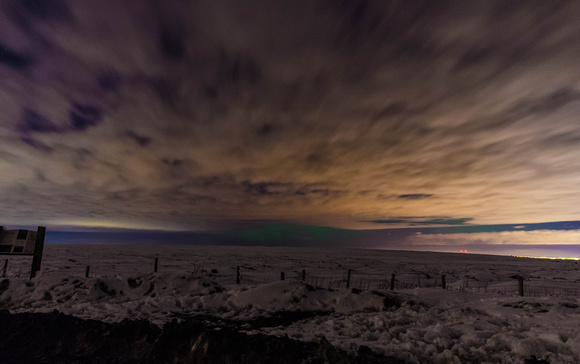 If you look carefully on the horizon and in-between the clouds you can see little glimpses of the green that is synonomous with the Northern Lights.

The two red dots to the right of shot, I believe may be coming from the Holme Moss TV tower that overlooks Holmfirth.

This second shot, shows a little more of the lights peeking through the cloud. It's amazing that despite using the same camera settings, which I'll go into more shortly, the white balance changes each shot (I was using auto white balance). 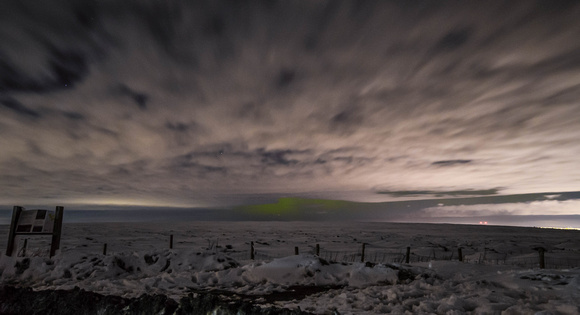 What was weird though was that the camera had captured, what I believe to be Aurora Borealis, yet due to the cloud and constant staring into the night sky, I couldn't see it with the naked eye. 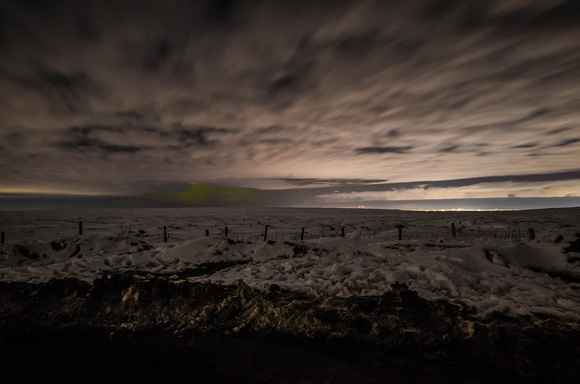 I was sat here for over an hour, and having now discovered a couple of aurora forecast websites and a twitter account that keeps you informed of potential aurora  activity, I'll be keeping a beady eye on these and will at some point get better shots, and will also in the meantime research other places to view them.

All 3 of these shots were taken using my Sigma 10-20mm wide angle lens, camera on tripod and using a cable shutter release. ISO 1000, f/4.8 and a 15sec exposure, and most importantly, camera in manual mode.

These are roughly the recommended setting to take shots of the northern lights, and as you take each shot you can adjust the ISO, aperture and shutter speed to suit the look you are wanting to get with your pictures. The general rule of thumb is, use the widest aperture you can with the lens you are using, and if necessary, adjust the ISO to get the slow shutter speed you require. If the northern lights are putting on a great show above you and moving slowly, then you need to change your shutter speed to around a 30sec exposure.

So a little disappointed that I didn't see them in full effect, but it makes me more determined to see this spectacle with my own eyes, but then excited at the same time that I did manage to capture a bit of it through the camera.

Aurora Borealis, I've got my beady eye on you!!!!